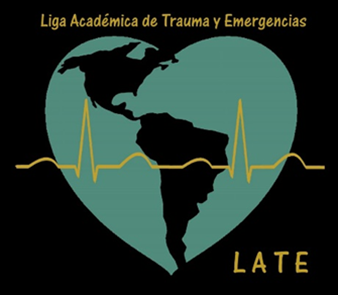 The first Ecuadorian Academic Trauma League (LATE) was created in 2013 with the support of 2 universities, Universidad del Azuay and Universidad de Cuenca in the city of Cuenca – Ecuador. LATE has the support of Public Health, Red Cross, EMOV and the two hospitals were all  the practices are done. LATE has the support of four professors. Two of them are from Universidad del Azuay and the other two from the Universidad de Cuenca.  They are surgeons who work at HVCM and dictate conferences to  LATES members. Students were chosen based on the best scores of the trauma knowledge tests, grades at medical school, knowledge of first aid  and number of publications made. There are four conferences dictated to the students that want to be part of LATE based on basic trauma, prehospital management, first aid, and how to treat a traumatized patient. In 2013, 116 students wanted to be part of LATE but only 45 students were accepted.  In 2014,  400 students wanted to be part of LATE but only 42 were admitted. LATE’s directive is conformed by 14 members  and there are 4 main  committees: medical education, promotional and preventive projects in the community, research and investigation, control and discipline.

Board of directors – LATE: